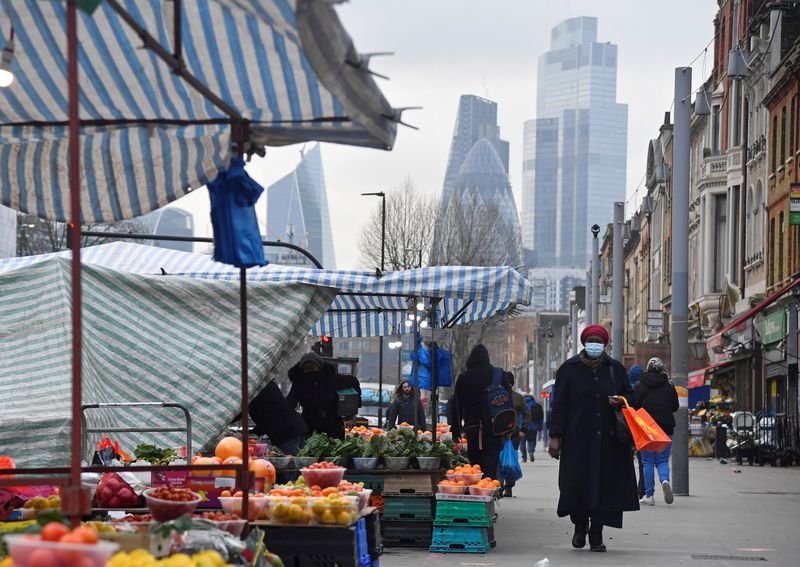 LONDON (Reuters) - British food price inflation looks on course to hit 20% in the first quarter of next year, U.S. bank Citi predicted on Wednesday after the latest official data pointed to further price rises in the pipeline.

Overall consumer price inflation hit a fresh 40-year high of 9.1% in May, as rising food costs - especially for bread and meat - took over from surging energy prices as the main driver of the latest increase in CPI.

While Russia's invasion of Ukraine is disrupting supplies of grain and vegetable oil, food prices more broadly have been pushed up by poor weather and rising energy prices, which increase the cost of fuel, shipping and fertiliser.

Food and non-alcoholic drinks prices paid by consumers in May were 8.7% higher than a year ago - their biggest increase since March 2009 - and manufacturers' ingredient costs are rising even more rapidly.

The prices manufacturers paid for domestic food materials is up 10.3%, while imported food costs - which account for almost half Britain's consumption - were 20.5% higher, the largest rise since December 2008.

"Food inflation overshot our forecasts. We now expect price growth here to peak at a little over 20% in Q1 2023, with producer price inflation here continuing to accelerate," Citi economist Benjamin Nabarro wrote in a note to clients.

Last week industry forecasters the Institute for Grocery Distribution (IGD) predicted food price inflation would peak at 15% in the coming months, and said some households were already skipping meals.

Surging food prices are a particular concern for Britain's poorest households, who spend a higher proportion of their income on meals. Supermarkets have reported shoppers trading down to cheaper ranges.

Citi said the visibility of rising food prices was also likely to put greater upward pressure on wage demands than other types of inflation - a concern for some officials at the Bank of England who fears big pay rises might entrench inflation.