UniCredit surprises with buyback as it tackles Russia exit 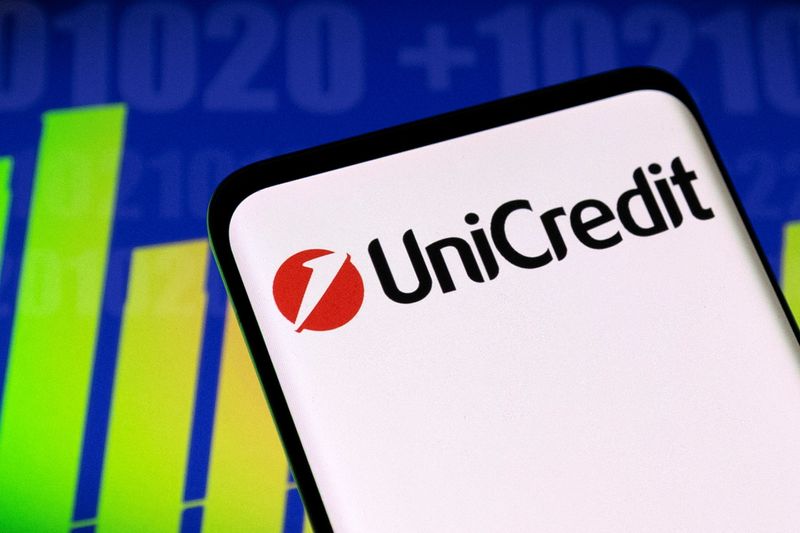 © Reuters. Unicredit logo and stock graph are seen displayed in this illustration taken, May 3, 2022. REUTERS/Dado Ruvic/Illustration

MILAN (Reuters) -UniCredit cheered investors by saying it would soon start a 1.6 billion euro ($1.7 billion) share buyback put at risk by the Ukraine war, even as it set aside almost as much to cover the cost of quitting Russia.

One of Europe's banks most exposed to Russia, UniCredit said the 1.3-billion-euro provision booked to first quarter results covered more than 70% of the capital hit it could suffer in a worst-case scenario.

It could now write off in full its Russian unit, were it to be nationalised or sold for free, with no further impact on capital.

"We now have the flexibility to consider and execute the best solution for all our stakeholders," CEO Andrea Orcel said on Thursday.

The former UBS banker declined to give an update on progress to severe ties with Russia's AO UniCredit Bank. He said that while it was clear "where our stakeholders want us to go" in relation to Russia, "exit from a country is complicated".

"We'll communicate things when they're executed, not while they're in progress," he said, adding he expected to have clarity on the "endgame scenario" for Russia in the second quarter.

In the meantime, UniCredit trimmed its Russian exposure to 7 billion euros, partly through transactions such as asset swaps with non-sanctioned Russian counterparties that had business in Europe.

Orcel said escalating international sanctions had reduced opportunities for such deals. In two instances, UniCredit had worked "day and night" on accords it had to scrap because sanctions had kicked in 48 hours before signing.

"The window has become quite small," he said.

Assuming a write-off of the Russian unit, a 40% recovery rate on cross-border loans and a 400 million euro hit on derivatives, UniCredit said losses could reach at most 5.2 billion euros - shaving 1.28 percentage points off its core capital.

Having borne the bulk of the capital hit in the quarter, UniCredit stuck to a pledge to return at least 16 billion euros in dividends and share buybacks by 2024.

After Russia invaded Ukraine, UniCredit had confirmed cash dividends on 2021 results but made a proposed 2.6 billion euro buyback contingent on its core capital ratio remaining above 13%.

Core capital declined one full point to 14% in the quarter, after taking into account the 1.6 billion euro share buyback UniCredit said would start as soon as next week after being approved by the European Central Bank (ECB).

"I'm confident that we will execute the remaining 1 billion euros," Orcel said.

UBS analysts said the surprise buyback announcement showed the "ECB's comfort about UniCredit's solvency position even in highly uncertain conditions", adding it would significantly boost earnings per share given where shares trade.

UniCredit's market value has almost halved due to the Ukraine crisis after reaching a four-year high in early February on the back of Orcel's payout promises. Shares rose 6% by 1231 GMT making them among the top three gainers on the Milan bourse.

The CEO said UniCredit's operating turnaround was progressing and confirmed a 2022 goal of a net profit after special coupon payments above 3.3 billion euros on revenues of around 16 billion - despite stripping out Russia's contribution.

Net income declined 70% from a year earlier to 247 million euros, below a 413 million euro consensus forecast, due to the larger-than-expected Russian provisions.