US Budget Deficit to Hit Lowest Since 2018 This Year, CBO Says 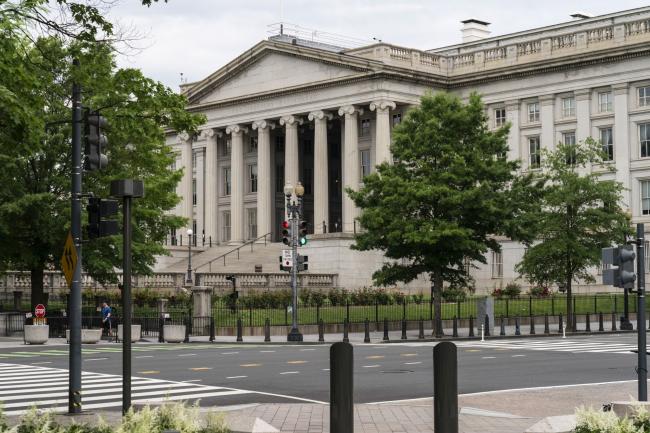 © Bloomberg. The US Treasury building in Washington, D.C., US, on Sunday, May 22, 2022. The Federal Reserve raised interest rates by 50 basis points earlier this month and the chairman indicated it was on track to make similar-sized moves at its meetings in June and July.

The US federal budget is headed for the narrowest deficit in four years as pandemic stimulus spending winds down and the Treasury enjoys a record influx of revenue, according to the Congressional Budget Office.

As a share of gross domestic product, the gap will shrink to 3.9% in the fiscal year that began Oct. 1, the nonpartisan arm of the legislature said in its long-term outlook Wednesday.

Revenues will soar to nearly one-fifth of GDP in 2022, one of the highest-ever levels, amid increases in individual income taxes, the CBO said. Spending this fiscal year makes up 23.5% of GDP, less than last year, and continues to decline over the next several years as pandemic spending wanes.

Further out, spending is seen increasing thanks to higher health care and social security expenses as the population ages.

The total debt held by the public is seen at 98% of GDP by the end of 2022, and expected to average 110% over the following decade.

Over the longer term, the CBO sees US economic expansion slowing, with nominal GDP projected to grow at an average annual rate of 3.9% over the next three decades, compared with 4.5% during the prior 30 years.

Part of that downward revision is due to lower fertility rates and an aging population. The US population increases just 0.3% annually to 369 million people to 2052, the CBO said, one-third the rate of the past three decades. By 2043, the CBO estimates that immigration accounts for all of US population growth.

The number of Americans in the prime working years of age 20 to 64 increases 4.6% in the next 30 years and makes up the largest chunk of the population, while those over 65 years old jump 46% and the number of teenagers and kids decline.

The weaker economic outlook also factors in slower labor productivity growth, which the CBO forecasts will expand at an average annual rate of just 1.3% in the next three decades, compared to 1.5% in the previous 30 years.