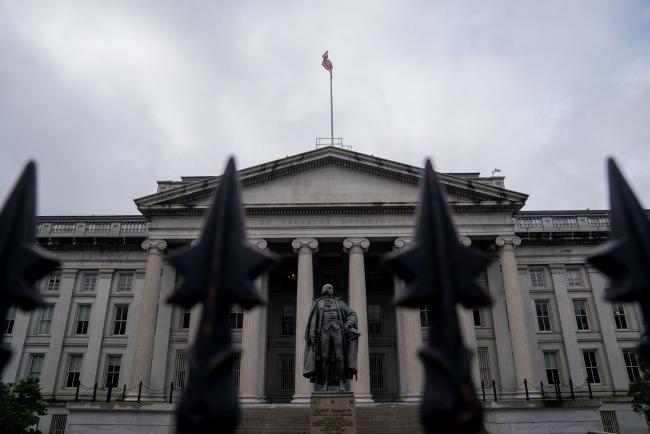 © Bloomberg. The U.S. Treasury Department building in Washington, D.C., U.S., on Saturday, June 26, 2021. The Federal Reserve might consider an interest-rate hike from near zero as soon as late 2022 as the labor market reaches full employment and inflation is at the central bank's goal.

(Bloomberg) -- The US government’s budget deficit widened by 12% for the first quarter of the fiscal year, presaging what’s set to be an intense political battle over fiscal policy.

The budget gap for October through December reached $421 billion, with the increase from the previous year largely driven by rising expenses linked to higher inflation, a Treasury Department release showed Thursday.

Interest payments on public debt rose by $57 billion, or 37% over the same period a year before, to $210 billion. The Treasury has been forced to pay investors higher rates on new debt as the Federal Reserve ratchets up its benchmark interest rate to combat inflation.

The figures are certain to catch the attention of Republicans, who now control the House and are gunning to rein in spending. President Joe Biden and Democratic lawmakers are determined to safeguard key programs, setting the stage for a standoff over raising the federal debt limit — something economists estimate will be needed after July.

Social Security payments also climbed, as cost-of-living adjustments linked to inflation increased. Outlays from the Social Security Administration in the first quarter of the 2023 fiscal year totaled $328 billion, up about 7% over the same period a year earlier.

Biden last year had touted major deficit reduction, crediting his economic-recovery programs. The gap for the 2022 fiscal year was $1.38 trillion, down from $2.78 trillion the prior year.