US Consumers Are Still Applying for Credit Cards Despite Higher Rates 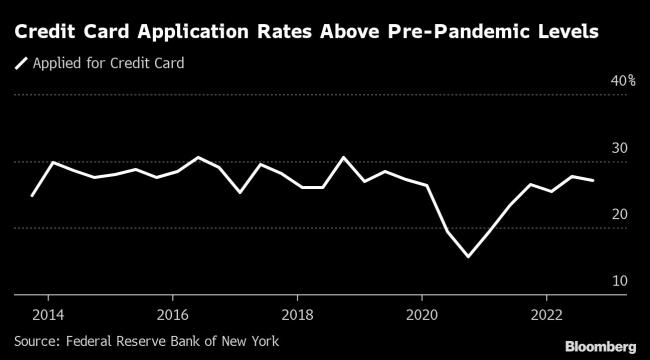 (Bloomberg) -- US consumers continued to seek out more credit cards this year even as the Federal Reserve aggressively lifted borrowing costs, a shift that cooled demand for mortgages, auto loans and other types of credit, according to research from the New York Fed.

Application rates for credit cards “remained robust” this year, reaching 27.1% in October, up from 26.5% a year earlier and above the pre-pandemic level of 26.3% in February 2020, according to the New York Fed’s most recent credit access survey released on Monday. In contrast, application rates for credit overall declined slightly this year, following a rebound seen in 2021.

The Fed is attempting cool the economy and inflation by rapidly raising interest rates, which makes it more expensive for consumers and businesses to borrow money. Policymakers lifted the target on their benchmark interest rate to a range of 3.75% - 4% this month, up from near zero levels in March.

The Fed’s rate moves are having a clear effect on the housing market, with mortgage rates near 7%, more than double the levels seen at the start of the year. The shift priced out some homebuyers and significantly cooled demand for new mortgage loans.

The report showed that some consumers are marginally more concerned about their future expenses. The odds of being able to come up with $2,000 to cover a surprise expense in the next month dropped to an average 67.5% in 2022 from 68.2% last year. But the anticipation of needing to find $2,000 to cover such an expense also declined to an average probability of 32% this year from 33.1% last year.