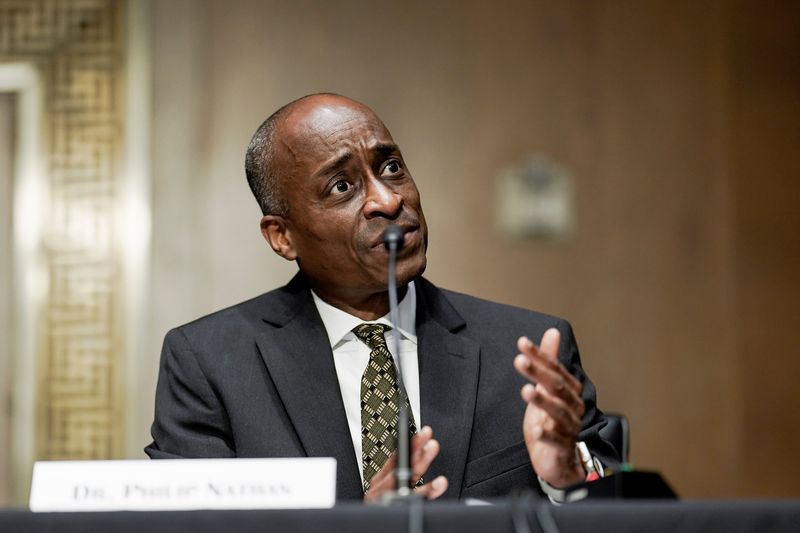 © Reuters. FILE PHOTO: Dr. Philip Nathan Jefferson, of North Carolina, nominated to be a Member of the Board of Governors of the Federal Reserve System, answers a question to U.S. Senator Raphael Warnock (D-GA), during a Senate Banking, Housing and Urban Affairs Com

(Reuters) - The U.S. Senate on Wednesday voted overwhelmingly to confirm Philip Jefferson, an economist and Davidson College's dean of faculty, to the Federal Reserve Board.

Jefferson's appointment was approved by a 91-7 vote with all of the no votes coming from Republicans. He is the fourth Black man to be a governor at the U.S. central bank. His term runs to 2036.

Lawmakers on Thursday are expected to hand Jerome Powell a second term as Fed chair, though that confirmation vote is likely to be by a slimmer margin.

However, that vote will amount not only to an endorsement of his handling of the pandemic crisis and the devastating 2020 recession that marked his first term, but also for the round of sharp interest rate hikes he began in March to fight the decades-high inflation that is marring his second.

Jefferson was confirmed a day after Vice President Kamala Harris cast a tie-breaking vote on the Senate floor to confirm another of President Joe Biden's nominees to the Fed, Michigan State University's Lisa Cook.

She is the first Black woman to become a Fed governor. Two Black governors have never before served simultaneously on the Fed Board.

For Jefferson, the confirmation marks a bit of a return to his roots: his first job after graduating from Vassar College in New York State was as a research assistant at the Fed.

Before taking his current job at Davidson College in North Carolina, he taught economics for more than two decades at Swarthmore College in Pennsylvania, and before that at Columbia University in New York. He has published research on monetary policy and written extensively on wages, poverty, and income distribution.

The seven-member panel will still be one seat short of its full complement.

Earlier this month Biden said he would nominate former Treasury official Michael Barr to be the Fed's vice chair of supervision. His initial pick for the job, Sarah Bloom Raskin, withdrew her name after opposition from Republicans and one Democrat denied her a path to confirmation.