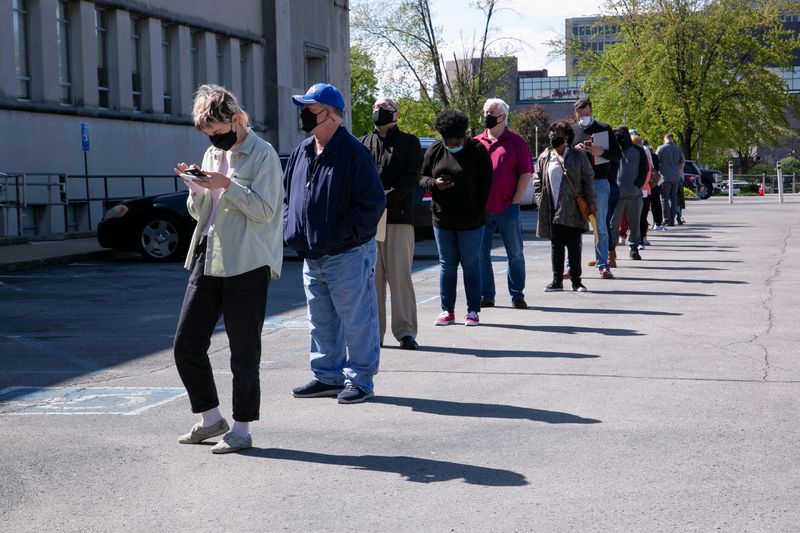 (Reuters) - The number of Americans filing new claims for unemployment benefits fell last week, the Labor Department said on Thursday, data that showed no impact yet on employment from the surge in U.S. coronavirus infections to a record.

Initial claims for state unemployment benefits dropped to a seasonally adjusted 198,000 for the week ended Dec. 25 from a revised 206,000 a week earlier. Early this month, claims dropped to a level last seen in 1969.

Economists polled by Reuters had forecast 208,000 applications for the latest week. Claims have declined from a record high of 6.149 million in early April of 2020.

Applications typically increase during the cold weather months, but an acute shortage of workers has disrupted that seasonal pattern, resulting in lower seasonally adjusted claims numbers in recent weeks. Discounting the weekly volatility, the labor market is tightening, with the unemployment rate at a 21-month low 4.2%.

There were a record 11.0 million job openings at the end of October. Higher wages as companies scramble for scarce workers are helping to underpin consumer spending.

The economy grew at a 2.3% annualized rate in the third quarter, with consumer spending rising at a 2.0% pace. Growth forecasts for the fourth quarter are as high as a 7.2% rate. For the whole of 2021, the economy is expected to grow 5.6%, which would be the fastest since 1984, according to a Reuters survey of economists. The economy contracted 3.4% in 2020.

Questions are now arising over how sustainable that momentum may prove to be with Omicron's rapid spread pushing COVID-19 infections back to record highs, exceeding even last winter's crushing wave. On top of that, the Biden administration's $1.75 trillion domestic investment plan is stalled in the U.S. Senate.

Against those uncertainties, some economists have begun cutting their growth estimates for next year.