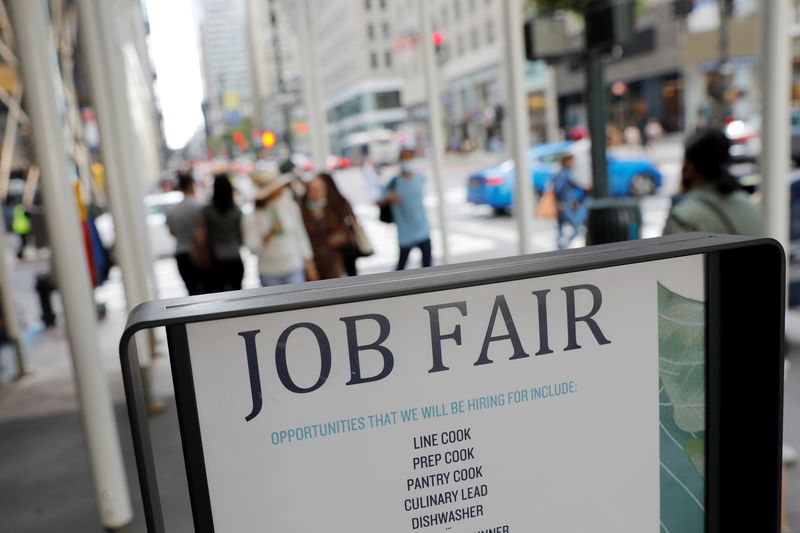 © Reuters. Signage for a job fair is seen on 5th Avenue after the release of the jobs report in Manhattan, New York City, U.S., September 3, 2021. REUTERS/Andrew Kelly

WASHINGTON (Reuters) - New claims for U.S. unemployment benefits increased to a more than two-month high last week, but remained at a level consistent with tightening labor market conditions and further wage gains that could keep inflation hot for a while.

The report from the Labor Department on Thursday also showed the number of Americans collecting state unemployment checks was the smallest in more than 52 years towards the end of April. Economists brushed off last week's increase in initial claims, arguing that the data are volatile around moving holidays like Easter, Passover and school spring breaks.

Initial claims for state unemployment benefits rose 19,000 to a seasonally adjusted 200,000 for the week ended April 30, the highest since mid-February. Economists polled by Reuters had forecast 182,000 applications for the latest week.

Claims at 200,000 are viewed as consistent with strong demand for workers. They have declined from a record high of 6.137 million in early April 2020.

The number of people receiving benefits after an initial week of aid dropped 19,000 to 1.384 million during the week ending April 23. That was the lowest level for the so-called continuing claims since January 1970.

Government data this week showed there were a record 11.5 million job openings on the last day of March, which widened the jobs-workers gap to a record 3.4% of the labor force from 3.1% in February. The labor market imbalance is forcing employers to increase wages, contributing to soaring inflation.

Compensation for American workers logged its largest increase in more than three decades in the first quarter.

The Federal Reserve on Wednesday raised its policy interest rate by half a percentage point, the biggest hike in 22 years, and said the U.S. central bank would begin trimming its bond holdings next month as it battles sky-high inflation.

It started raising rates in March. Fed Chair Jerome Powell told reporters that "the labor market is extremely tight, and inflation is much too high."

The rise in claims last week was driven by a 7,342 jump in filings in New York and a 3,169 increase in Illinois. Those gains offset notable declines in California, Connecticut, Massachusetts, New Jersey and Ohio.

Stocks on Wall Street were trading lower. The dollar rose against a basket of currencies. U.S. Treasury prices fell.

The government is expected to report on Friday that nonfarm payrolls increased by 391,000 jobs in April after rising 431,000 in March, according to a Reuters survey of economists. Job growth has exceeded 400,000 for 11 straight months.

But there are signs that high labor costs are starting to hurt small businesses, especially those in the leisure and hospitality industry. A separate report from global outplacement firm Challenger, Gray & Christmas on Thursday showed job cuts announced by U.S.-based companies rose 14% to 24,286 in April.

The second straight monthly increase in layoffs was led by the leisure and hospitality industry. The rise in layoffs was in sync with the ADP National Employment report on Wednesday, which showed the smallest private payrolls gain in two years in April as employment at businesses with less than 50 workers fell.

Rising labor costs were reinforced by a third report from the Labor Department showing worker productivity plummeting at its sharpest pace in more than 74 years in the first quarter, suggesting that the Fed cannot, for now, rely on workers being more productive to rein in inflation.

Nonfarm productivity, which measures hourly output per worker, plunged at a 7.5% annualized rate last quarter, the deepest slide since the third quarter of 1947. That followed a 6.3% growth pace in the fourth quarter.

But last quarter's plunge likely exaggerates the pace of decline in productivity, which was flagged in last week's first-quarter gross domestic product report. The economy contracted at a 1.4% rate in the January-March period.

Productivity fell at only a 0.6% pace from a year ago. It has been volatile since the start of the COVID-19 pandemic more than two years ago. Hours worked increased at a 5.5% rate in the first quarter. Unit labor costs - the price of labor per single unit of output - shot up at an 11.6% rate. That followed a 1.0% growth pace in the October-December quarter. Unit labor costs increased at a 7.2% rate from a year ago.

"There is no getting around the fact that the tight state of the labor market has pushed 'real' labor costs for employers well above levels consistent with the Fed's 2% inflation goal," said Sarah House, a senior economist at Wells Fargo (NYSE:WFC) in Charlotte, North Carolina. "Labor costs are homegrown and signal that the Fed still has significant work to do in bringing down inflation."