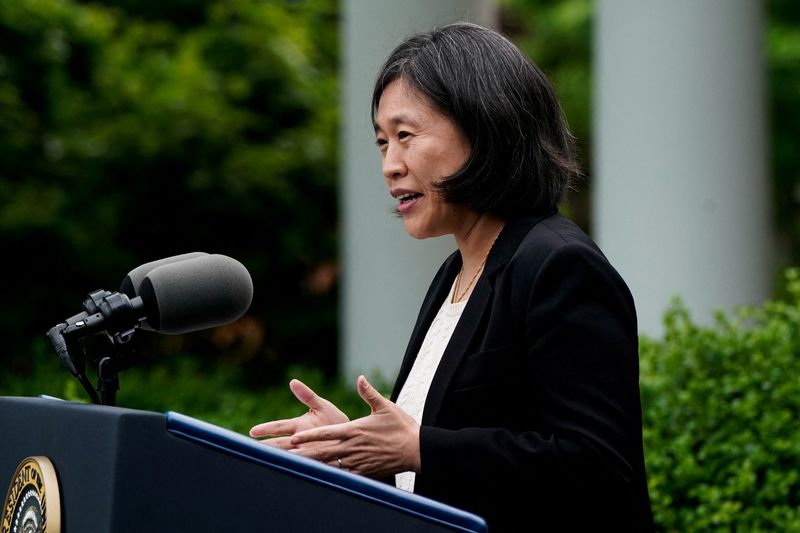 WASHINGTON (Reuters) - U.S. Trade Representative Katherine Tai on Wednesday said that she views tariffs on Chinese goods as "a significant piece of leverage" in the U.S.-China trade relationship and removing them would likely have a limited effect on controlling short-term inflation.

In testimony before a U.S. Senate Appropriations subcommittee, Tai said that it was important to focus on protecting American trade interests against China's plans to dominate important industries such as semiconductors.

"We need to be keeping our eye on the ball on this bigger picture," Tai said.

Tai's comments indicated that she was still pushing for U.S. President Joe Biden to maintain tariff leverage over China as he deliberates over whether to lift some of the so-called Section 301 duties on Chinese imports as a way to try to ease high inflation.

"The China tariffs are, in my view, a significant piece of leverage - and a trade negotiator never walks away from leverage," Tai said.

Tai added that the key challenge for Biden's administration was converting "this leverage into a strategic program that will strengthen American competitiveness and defend our interests in a global economy in which China will continue to play."

Tariffs and other trade tools can help improve the competitive position of the U.S. economy in the medium and long term, Tai said, adding: "With respect to short-term challenges, there is a limit to what we can do with respect to, especially, inflation."

Biden is intensifying White House discussions on whether to scrap tariffs on a range of Chinese goods to curb inflation, but no decision is likely before next week's Group of Seven leaders summit, people familiar with the matter have told Reuters.

The cuts are potentially substantial, but the scale has not been decided, according to the sources.

Punitive U.S. duties of up to 25% remain on Chinese goods valued at some $370 billion when they were imposed in 2018 and 2019 - years with low inflation. Only about $50 billion of the total was directly tied to the Section 301 investigation pursued by former President Donald Trump's administration into China's misappropriation of U.S. technology and intellectual property.

Testifying on her office's $76.5 million fiscal 2023 budget request - a $6.5 million increase from the prior year - Tai said that inflation pressures will eventually subside, but the United States will still face long-term strategic challenges from China's state-dominated economic policies.

"We will one day find ourselves on the other side of these challenges. And I think it is very, very important that what we do now not undermine the need that we have to make ourselves more competitive and to defend our economic interests in a global system that for the past several decades has eroded our leadership in many, many different areas in the economy," Tai said.