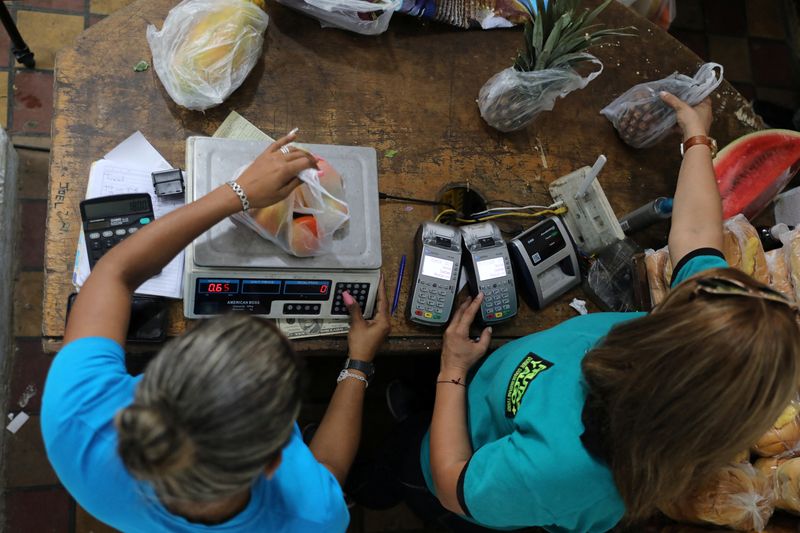 CARACAS (Reuters) - Venezuela's annual inflation rate hit 686.4% in 2021, demonstrating a deceleration of consumer price growth versus the previous year when inflation was 2,959.8%, the country's central bank said on Saturday.

Monthly inflation in December rose 7.6% and, since September, the inflation rate has remained in the single digits.

The deceleration in prices follows government measures which include the restriction of credit and lower spending in bolivars to maintain the stability of the exchange rate.

As a result of this strategy, government entities and state-owned oil company PDVSA now pay suppliers in cash with foreign currency.

During an interview broadcast on state television at the start of this month, Venezuela's President Nicolas Maduro said hyperinflation - which ran for four years - had been left behind.

Despite measures to improve supplies and control inflation, prices remain high and continue to hit the earnings of Venezuelan families, limiting their ability to buy goods like food and medicine. A minimum monthly salary is equivalent to $1.50.

In 2019, amid hyperinflation and economic collapse, Venezuela's government relaxed economic controls, allowing greater quantities of foreign currency to circulate, which provided some sectors with breathing space.

The central bank has yet to publish data regarding the country's economic growth.