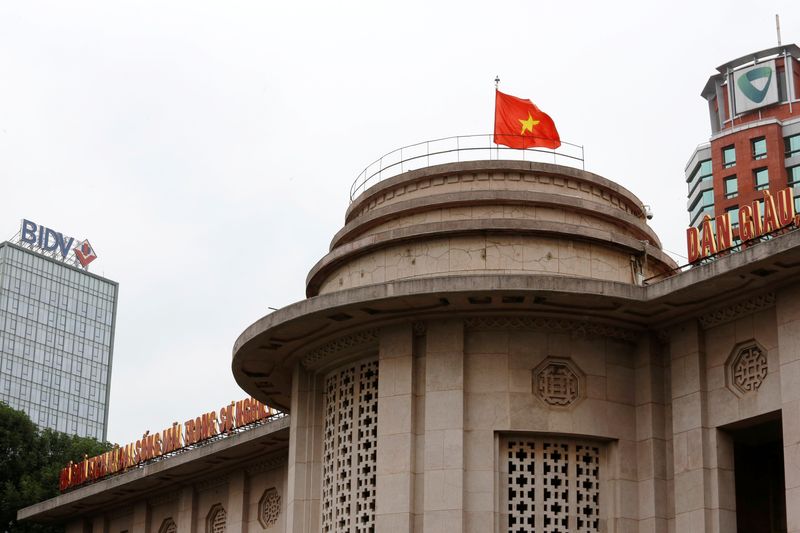 © Reuters. FILE PHOTO: A Vietnamese flag flies atop the State Bank building, near the Vietcombank and Bank for Investment and Development of Vietnam buildings, in central Hanoi, Vietnam November 23, 2017. REUTERS/Kham

HANOI (Reuters) - Vietnam's central bank announced on Thursday it would raise its policy rates by 100 basis points, in a rare monetary tightening move aimed at keeping inflation under 4% this year.

Effective Friday, the refinancing rate will be raised to 5.0% and the discount rate to 3.5%, the State Bank of Vietnam (SBV) said in a statement on its website.

The move followed this week's rate hike by the U.S. Federal Reserve and similar steps taken by central banks around the region as prices rise across the world. Vietnam's prime minister had earlier on Thursday urged the central bank to reconsider policy rates.

Can Van Luc, an economist with the Bank for Investment and Development of Vietnam and an advisor to the government, said the rate hike "is in line with the global trend and is expected to help better control inflation in Vietnam."

Vietnam's consumer prices in August rose 3.6% from end-2021. The government has targeted inflation at below 4% this year.

The dong currency fell for nine consecutive sessions to 23,700 per dollar, the lowest since at least 1993, according to Refinitiv Eikon data.

The daily reference rate set by SBV was recorded at 23,316 dong per dollar on Thursday, the weakest since at least 2005, data showed.

The bank on Thursday also said it would raise caps on interest rates of dong-denominated deposits from Friday, by 0.3-1.0 percentage points, depending on maturities.