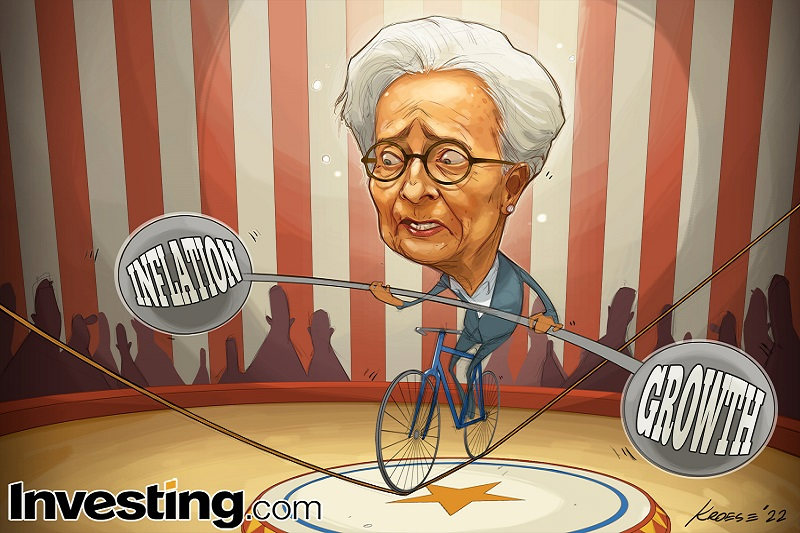 Investing.com -- Central banking is always something of a high-wire act, forcing an institution to tread a precarious path in the knowledge that a slip in either direction could quickly lead to disaster.

To judge by market reactions after Thursday's press conference, European Central Bank President Christine Lagarde could be forgiven for thinking that the disaster had already happened. The euro has slumped by 3 cents against the dollar since, and bond spreads within the currency union have widened sharply, in a faint but nonetheless unsettling echo of the 2012 euro crisis.

Markets, it seemed, were unimpressed by the ECB's refusal to raise interest rates faster, at a time when the single currency is losing its purchasing power like never before. At the same time, they were thoroughly scared of what even a moderate rise in interest rates would do to the debt sustainability of countries like Italy and Greece.

In truth, it is hard to see a different course of action that would have resolved the natural tension between those two issues. To have stuck with the bank's previous guidance of only two 25 basis point increases in the deposit rate by September would have invited accusations of complacency, after consumer inflation leaped to 8.5% in May, overshooting expectations as it did in the U.S.  But to have promised a 50 basis point hike immediately would have risked letting the bond market genie out of the bottle, provoking the kind of self-reinforcing panic that drove the crisis in 2011 and 2012.

For some, comparisons with 2012 is unjustified.

"Nothing that is happening now has any resemblance to the 2011/2 debt crisis," Robin Brooks, an economist with the Washington-based International Institute for Finance,  said via Twitter (NYSE:TWTR) over the weekend, "People confuse rising yields with crisis. We're finding out right now what yields are without (quantitative easing). That's all."

It's certainly true that Greek and Italian yields, in particular, are nowhere near their highs of a decade ago, either in absolute terms, or relative to the 10-year German bond that has traditionally been the region's risk-free benchmark asset. Moreover, the Eurozone and the European Union have spent the last decade slowly but steadily expanding the common financial safety net whose absence was one of the key factors that led many to believe - erroneously, as it turned out - that the single currency project would not survive its first crisis.

All the same, the sad truth is that much of the Eurozone cannot afford higher interest rates. The Eurozone economy, for most of its lifetime, has not grown fast enough to sustain the kind of debt burden that it currently has. Sovereign debt was already high before Covid-19, but the pandemic has created a big overhang of public debt. Every rise in market interest rates will force governments to divert more and more resources toward servicing that debt, and away from productive investment in schools, health and infrastructure.

When the Maastricht Treaty outlining the framework for monetary union was unveiled three decades ago, it posited that no country with a public debt ratio above 60% of GDP would ultimately be strong enough to share a currency with the likes of Germany and the Netherlands. Today, even a country like France, whose fitness for the euro has never been in doubt, has a debt ratio of 112%. Italy's is 150%, Greece's - 193%. The overall weight of this debt will make the economy much more sensitive to any changes in interest rates, current and expected.

That means that the ECB is much likelier to squeeze out any "excess demand" in the system with just a couple of rate increases than, for example, the Federal Reserve. But overheating has not been the Eurozone's problem. The real problems for the Eurozone lie outside its control - in Russia's war with Ukraine, and in China's inability to live with Covid-19, both of which are already causing a visible slowdown in German manufacturing, traditionally the region's growth engine. Unless something substantial changes in those two areas, inflation may remain higher for longer than thought.

There are no easy options for the tightrope walker. The only thing left is to concentrate and to ignore the distractions. And to hope.