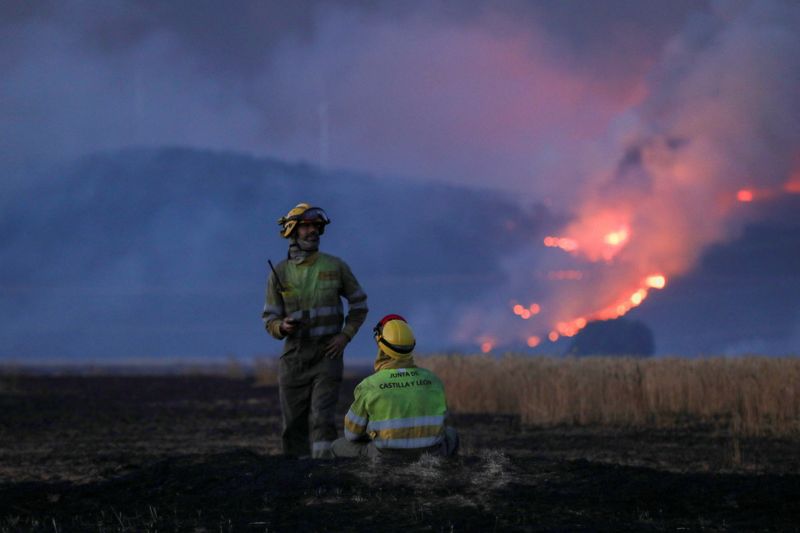 © Reuters. Firefighters work at the site of a wildfire outside Tabara, Zamora, on the second heatwave of the year, in Spain, July 18, 2022. REUTERS/Isabel Infantes

ATHENS (Reuters) - When the blaze tore through a forest in Greece last August, swallowing up pine trees and scorching the earth, Stathis Albanis knew his beekeeping trade would suffer.

A year on, long after the flames died down, he says the impact on livelihoods like his will be felt for a generation.

"There are no pine trees left. The beekeepers will get honey again in 30 years, and that's only if the forest doesn't burn again," said Albanis, 62, who had been harvesting Greece's prized pine honey on the island of Evia since aged 10.

As wildfires again rampage across Europe this summer, the Greek beekeeper's predicament highlights the long-lasting damage done to thousands of individual livelihoods in farming and tourism, let alone the wider cost to the economy.

Already this year, wildfires have broken out in a dozen European countries, often simultaneously, burning tens of thousands of hectares of land, and destroying homes and businesses.

According to a 2021 European Central Bank report, climate change could wipe over 4 percent off European GDP by 2030 in a worst-case scenario. Yet while the continent is slowly waking up to climate-related liabilities, authorities are struggling to grasp the full implications of wildfires.

An ECB report this year found that, of the euro area bank exposures to climate change deemed "high physical risk", the bulk of those were tied to wildfires mainly affecting southern countries, with a much smaller proportion linked to flooding and sea levels.

According to Moody's (NYSE:MCO) credit ratings agency, Greece - which suffered Europe's worst destruction from wildfires last summer - can at present cover most of the short-term costs through EU emergency funding. But a rise in the frequency and severity of fires could hurt its tourism industry in the long run.

"The long-term costs, not only due to wildfires but more broadly climate change, are rising," said Steffen Dyck, senior vice president at Moody's Investor Service.

"It is already an economic worry and will most likely increase further. The question then is, how well is Europe positioned compared to other regions to deal with this?"

At a time when national budgets and economies have been stretched by the pandemic, governments are under pressure to find more funding for essential firefighting equipment.

The EU's crisis management commissioner Janez Lenarcic told Reuters that member nations must prepare better. "What we see coming is that there will be larger number of more intense weather-related events," he said.

MONEY TO DOUSE THE FLAMES

Already countries are increasing spending for firefighting. France, where blazes sweeping through its southwest region burned campsites to the ground, said it has earmarked 850 million euros ($863 million) to upgrade its fleet of aircraft.

Greece, which just this week battled 50 to 70 wildfires a day, has more planes and firefighters compared to three years ago, government spokesman Giannis Oikonomou said. It has allocated 75 million euros for measures like clearing forests and roads "compared to zero budgets in the past."

But for exhausted Greek firefighters on the ground, who often depend on help from volunteers, more needs to be done.

"Older firefighters will remember we used to have a megafire every 10 to 15 years," said Dimitris Stathopoulos, president of the Greek firefighters' federation, calling for 4,000 new hires to cope with the growing workload.

"Now there is a megafire every three years."

Environmental groups like the World Wildlife Fund (WWF) say more money needs to be spent on preventing fires rather than putting them out.

In a recent report, it found Greece, Spain, Portugal, Italy and France were spending as much as 80% of available funds on suppression and just 20% on prevention.

Across southern Europe, those who live off the land engulfed by flames often take matters into their owns hands.

In the northern Portuguese municipality of Murça, where a fire burned uncontrolled this week, 67-year-old olive farmer Manuel Lopes lamented a lack of forest management.

He has a full water tank at home to extinguish flames if needed, and spends his own money to clean up dry vegetation that could be a fire risk on his and his neighbours' land.

"People emigrated, there are few people in the villages and everything was left uncultivated and now it is necessary to force people to clean up," he said.

The fires may exacerbate the problem of Europe's dying villages.

"Fires strip away the income of those who live from the forests," said Vasilis Douras, the former president of Greece's beekeepers' federation.

"If you want the villages to be alive, the state needs to find ways to keep the people there until the forests grow back."

With Europe not yet in its peak summer season, more extreme weather has been forecast.

"What is truly worrying is that we are just witnessing a preview of what will happen in a few years' time," said Victor Resco de Dios, professor of forest engineering at Spain's Lleida University.

"What we now consider anomalous will soon be the new normal."