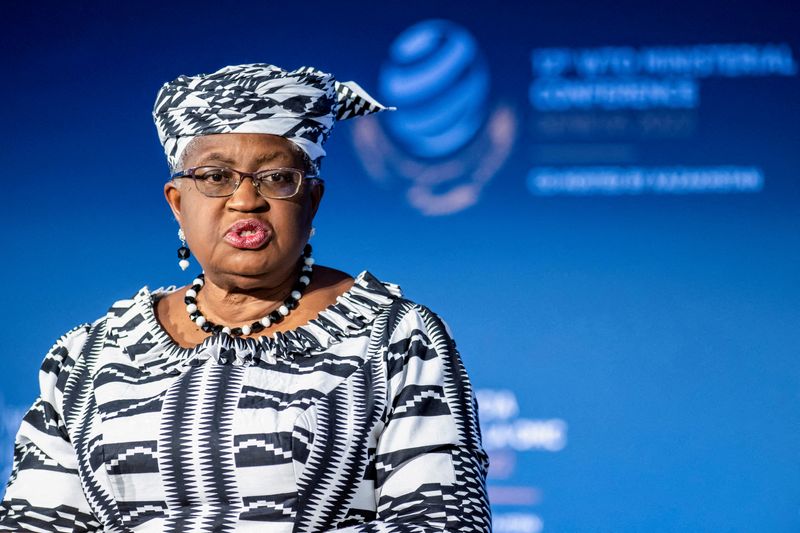 GENEVA (Reuters) -The World Trade Organization chief presented countries with a series of draft trade agreements early on Friday that included pledges on health, reform and food security and urged that they be accepted as a major meeting stretched into its second day of overtime.

The package, which director-general Ngozi Okonjo-Iweala described as "unprecedented", did not include two of the most important deals under consideration: fisheries and a partial waiver for intellectual property rights for COVID-19 drugs.

However, delegates said they may be added later, with negotiations ongoing at the WTO's Geneva headquarters ahead of a final meeting scheduled for 0100 GMT on Friday.

This week's meeting with over 100 trade ministers is the body's first such conference in over four years and is seen as a crucial test of its ability to strike multilateral trade deals amid high geopolitical tensions. It has already landed one, on maintaining a moratorium on e-commerce tariffs. [L1N2Y30KU]

In the letter presenting the documents, signed by Okonjo-Iweala and two WTO chairs, she asked members to consider the "delicate balance" achieved over five days of nearly round-the-clock talks that have been at times been charged with anger and frustration.

"The nature of compromise is that noone gets all of what they want," the letter said. "Let us complete our work tonight so we can honor those out there waiting for the WTO to deliver."

Under WTO practices, its 164 members all have to agree by consensus and a blockage on one topic can derail other negotiations.