Yen at risk of declining vs dollar into Q4 or later, economists say: Reuters poll 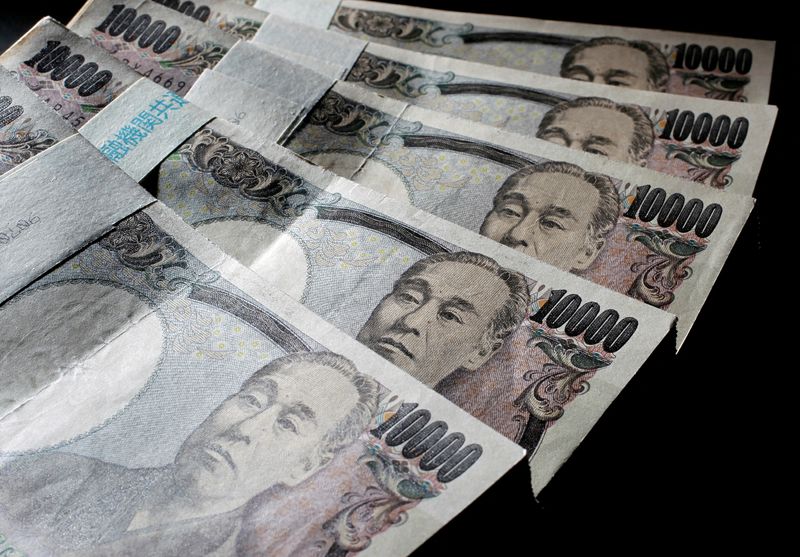 TOKYO (Reuters) - The yen is at risk of weakening further against the dollar for at least the rest of 2022, more than two-thirds of economists polled by Reuters said, underscoring the consequences of the Bank of Japan being the lone major central bank clinging to easy policy.

The BOJ is sticking to stimulus, ramping up bond buying to defend its yield cap even as the U.S. Federal Reserve, already on an aggressive campaign of half-point rate rises, looks set to debate an even bigger move of 75 basis points on Wednesday.

The resulting yen weakness is increasingly becoming a source of contention for policymakers. It hurts household budgets by driving up living costs that are already rising due to global inflation, offsetting the boost a cheaper currency gives exporters.

The Japanese currency has lost more than 14% against the greenback so far this year, briefly slipping as low as 135.58 yen per dollar on Wednesday, its lowest since October 1998, which was a time of global financial strain after a Russian debt default.

Wednesday's level was already close to the weakest forecast for the next 12 months provided by any of 47 foreign exchange strategists polled by Reuters just two weeks ago - 135.67 per dollar.

The yen's slide has been so severe that it led the government and the central bank to issue a rare joint statement on Friday expressing concern.

"The yen is likely to remain vulnerable to weakening as the Fed's rate hikes and the rise in long-term Treasury yields continue throughout the year," said Takumi Tsunoda, senior economist at Shinkin Central Bank Research Institute.

Just seven projected the risk would run its course by the end of next quarter, while none said the yen was no longer at risk of further weakening.

In a multiple-selection question asking for the most effective action from the government to stem further weakening in the yen, 12 out of 25 economists chose "reopen borders for more inbound tourists".

That was followed by "press the BOJ to tweak monetary policies", chosen by another eight respondents.

Other options included "restart more nuclear power plants" (chosen by eight respondents), "continue verbal warnings" (six) and "no need to do anything in particular" (four).

The BOJ was projected to keep its ultra-loose monetary policy at its next two-day rate review, concluding on Friday, the June 3-13 poll showed. Nearly 80% of 28 economists said the bank would not adjust policies until late 2023 or later, and all but two expected any such a shift would be unwinding of the easing.

Japan's economy was forecast to expand an annualised 4.1% in the current quarter, slower than the 4.5% projected in May's poll, according to the median forecast of 37 analysts.

Core consumer prices, which exclude volatile fresh food prices, will likely increase 2.1% this fiscal year, before decelerating to 1.1% in fiscal 2023, the poll showed.