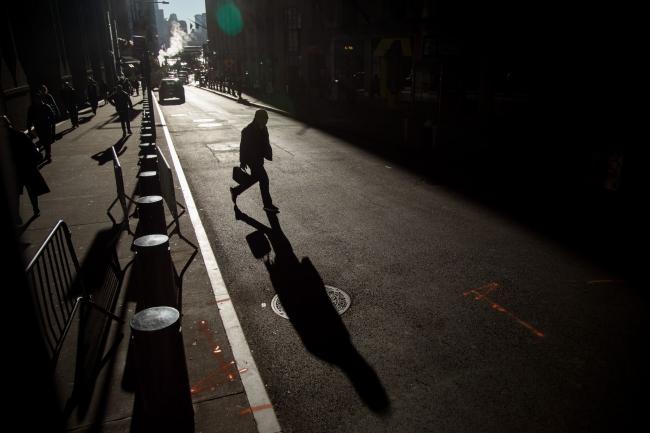 © Bloomberg. Pedestrians walk along Wall Street near the New York Stock Exchange (NYSE) in New York, US, on Wednesday, Nov. 9, 2022. US stocks declined following midterm elections that failed to yield a Republican sweep. Treasuries and the dollar caught bids in a sign of deteriorating risk sentiment. Photographer: Michael Nagle/Bloomberg

(Bloomberg) -- Young American men and men with college degrees led the “quiet quitting” movement in the US, according to new research that sheds more light on the pandemic-induced phenomenon.

Men aged 25 to 39 worked 16 fewer hours annually — voluntarily as opposed to layoffs — between 2019 and 2022, while men with at least a bachelor’s degree cut back 14 hours, the most among groups, researchers from Washington University found. Those with higher earnings and already working the most hours had the biggest reductions.

Quiet quitting refers to workers scaling back overall effort and time spent on the job, a phenomenon fueled by the pandemic that forced a rethink of work-life balance globally. While recessions typically prompt a drop in working hours amid layoffs, the research found that the pandemic-fueled downturn was different, with a large chunk of the reduction driven by Americans choosing more flexible hours or jobs.

“The reduction in hours worked may well persist. And that would not be a perverse outcome,” wrote report authors Dain Lee, Jinhyeok Park and Yongseok Shin at Washington University in St. Louis.

Overall, US workers had 11 fewer hours on the job during the pandemic than prior years going back to 2007, according to the paper Where are the Workers? From Great Resignation to Quiet Quitting. Men, who work on average more hours than women, logged 16 fewer hours each year, while women cut down by six hours.

Despite the step back from the workplace, Americans still work more than many other advanced economies. The average US employee put in 1,791 hours in 2021, higher than Japan, Canada and the UK, according to OECD data cited by the authors.