Youth vote more important than ever in Italy's election 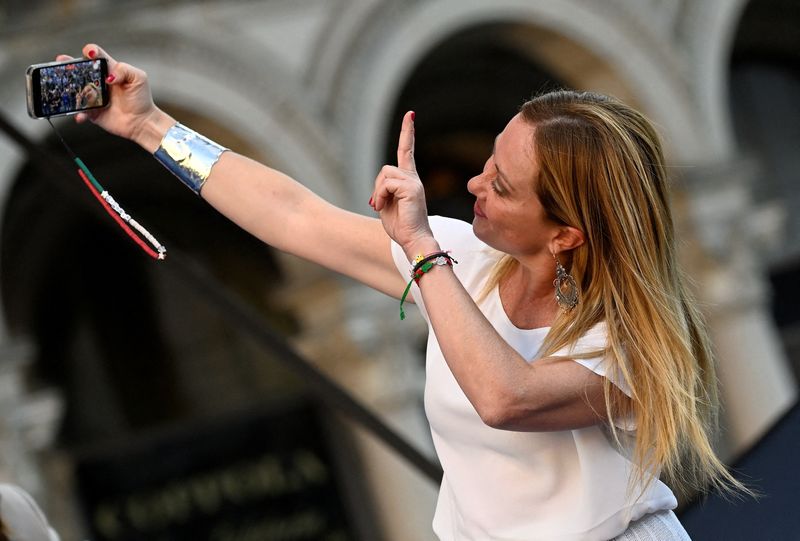 © Reuters. FILE PHOTO: Giorgia Meloni, leader of the far-right Brothers of Italy party, takes a selfie during a rally in Duomo square ahead of the Sept. 25 snap election, in Milan, Italy, September 11, 2022. REUTERS/Flavio Lo Scalzo/File Photo

By Alvise Armellini and Rodolfo Fabbri

ROME (Reuters) - For the first time in Italian history, 18-24-year-olds will enjoy full voting rights at the Sept. 25 national election, meaning the voice of young people should count more than ever before.

Ending a long-standing anomaly, the minimum voting age for the upper house Senate has been lowered from 25 to 18, bringing it into line with the lower house Chamber of Deputies. The two houses of parliament have equal powers.

"In terms of numbers, of course it means that young people matter more in these elections," Livio Gigliuto, vice-president of the Istituto Piepoli polling institute, told Reuters. "The key issue is how many of them actually vote."

The change in rules affects 4.1 million people, out of a total electorate of 51.4 million, and although pollsters say a sizeable number might abstain, politicians are not being shy in their attempts to win over new voters' hearts and minds.

True to his showman persona, former premier and cruise ship crooner Silvio Berlusconi has led the way in attempts to reach out to them via TikTok, with videos in which he uses funny voices, cracks jokes and plays on his playboy image.

"I'm speaking to those of you over the age of 18 – is it to ask you to introduce me to your girlfriend? Not at all! I am asking you to go and vote on September 25, and to vote for me," the 85-year-old said last week.

With his antics, Berlusconi has attracted more than 2.5 million likes on the social network, in less than three weeks. But is unclear whether the attention he is getting will translate into cast ballots.

"I watched Berlusconi's videos on TikTok, but because they make me laugh, not because I want to vote for him," said Alessandro Males, 20, a high school student from Milan who is planning to abstain.

"Generally speaking, I think voting does not lead to any change. I don't see any tangible differences for me whether there is one person or another in government," he said.

A poll released in August by the SWG institute estimated the potential abstention rate among younger voters at 34-38%, reporting that 43% of them believed that voting "is meaningless" because politicians "do whatever they want" once elected.

All the manifestos include generous promises targeted at young people struggling with work or studies, including help with tuition fees, mortgage and rent costs, the introduction of a minimum wage and the outlawing of unpaid internships.

The centre-left Democratic Party (PD) is also promising a 10,000 euro ($9,980) "dowry" for 18-year-olds from low-income families, and is messaging strongly on climate change, abortion and LGBTI rights.

Surveys suggests these are top concerns among young voters.

PD leader Enrico Letta "is really convinced this is one way in which he can close the gap with the centre-right", a centre-left candidate, who was not allowed to discuss strategy on the record, told Reuters.

It would be quite a comeback: before an opinion poll blackout came into force on Sept. 10, the PD-led bloc was polling below 30%, compared with more than 45% for the right-wing coalition fronted by Giorgia Meloni's Brothers of Italy (FdI) party.

The SWG poll in August showed the PD to be the most popular party in the 18-24 age group with 19% backing compared with 17% each for FdI and the left-leaning 5-Star Movement (M5S).

Support for 5-Star has been edging up since August, mostly thanks to its championing of welfare for the unemployed and poor, leaving the door open to a late surprise in Sunday's vote.

"Looking at what is on offer, I wouldn't feel like voting for anyone else," said Enrico Garitta, 26, from Palermo.