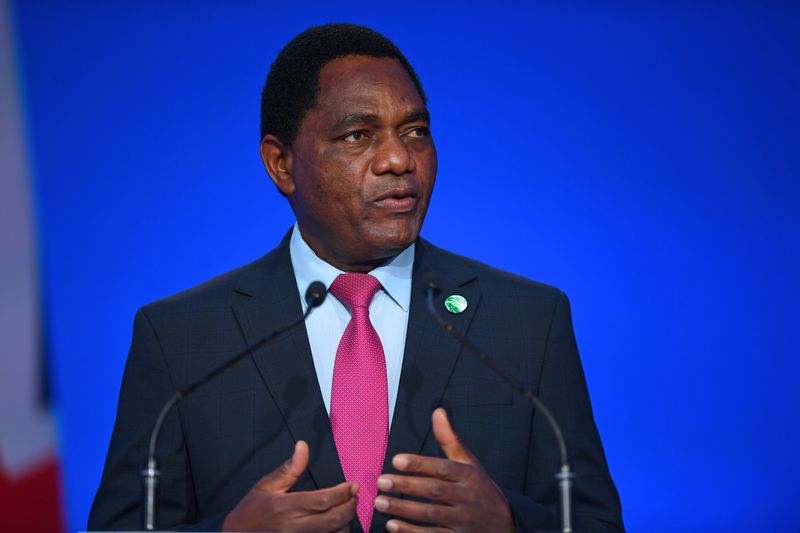 By Clara Denina and Helen Reid

CAPE TOWN (Reuters) - Zambia's President Hakainde Hichilema is pleased China will co-chair a creditor committee with France during debt negotiations, he told Reuters on Monday, adding that a partial write-off of the country's $32 billion debt was on the table.

Hichilema said Zambia aims to avoid another debt default after it became in 2020 the first country in the pandemic era to default on its debt.

"The overall approach is to rein in on the debt, which starts with ceasing to borrow recklessly going forward, especially not borrow at high cost," Hichilema said during an interview with Reuters on the sidelines of the Mining Indaba conference in Cape Town.

"Now that we have this common framework ... we are seeking a reduction in the debt as part of the package. Everything is on the table," he said.

Zambia, Africa's second-biggest copper producer, is struggling to jumpstart its economy as it grapples with a debt load reaching 120% of GDP.

Since Hichilema's election last August, Zambia has implemented business-friendly reforms and investor sentiment has improved, with the kwacha currency increasing in value against the dollar.

Zambia's debt totalled $31.74 billion at the end of 2021, according to official government data - of which $17.27 billion was external debt. China held $5.78 billion of the external debt.

The first meeting of the creditor committee is expected to take place next week, Finance Minister Situmbeko Musokotwane told Reuters in the same interview. He reiterated that debt talks should end in June, a timeline analysts consider ambitious.

Musokotwane had said previously that debt negotiations were "stalled" at International Monetary Fund meetings last month, after Zambia secured a staff-level agreement on a $1.4 billion three-year credit facility with the fund in December.

It also aims to increase production of wheat and maize in order to export, Hichilema said, adding that the country has held talks with the European Union among others about providing wheat to the bloc.

Asked whether Zambia would welcome Russian companies investing in the mining sector, Hichilema declined to answer, but said "we are against the war in Ukraine". Zambia voted in March in favour of a United Nations resolution condemning Russia's invasion of Ukraine.